Guardians make their own fate.

Vault of Glass is a free-to-play raid released in the Beyond Light DLC. Destiny 2 Vault of Glass is a remaster of the iconic raid from the original Destiny game. VoG raid was the first ever raid introduced to the Destiny universe and it was the first raid out of four raids from D1 to make their way into the sequel. Just like the predecessor, being the beloved raid among the community VoG raid inspires Guardians for new raid adventures, which brings about the popularity of Vault of Glass carry services.

The new Vault of Glass rewards include familiar armor sets from the original game and of course, the main attraction is a collection of Vault of Glass raid weapons – some of the most powerful units in Guardians’ armory that can be acquired from bosses and secret chests:

The desired goal will determine the most appropriate way to achieve it.

Complete Vault of Glass with the Full Raid option to get the most of the raid loot, including armor pieces and weapons with the option to loot extra hidden chests. However, if you simply want to try your luck on the Vex Mythoclast and other weapons from Atheon, then The Last Boss Only option will perfectly cover your needs.

This service can be provided either in Self-Play or Piloted mode which includes account sharing. Please, be ready to share your login and password with the booster if you choose the Piloted mode.

Participate and fight alongside a Fireteam of professional Destiny 2 players with the Self Play option or leave the challenge to the pro player, share the account and simply wait for results.

We don’t use any programs or bots – all orders are processed manually by our players. The stream of your boost or screenshots are provided at your request.

Choose the Self-Play option to explore the new raid with the team of pro players and experience the adventurous aspect of the game alongside the best Destiny 2 players.

Save yourself lots of time and avoid difficult challenges with the Piloted mode – our booster will complete the raid for you and get you the desired raid rewards once the Vault of Glass boost service is complete.

Epiccarry provides a variety of services in Destiny and other game titles – we are always helping our fellow gamers to reach their in-game goals and thousands of satisfied customers prove it again and again with excellent reviews.

Boost is available on the PC, PS, and Xbox platforms.

Our Support team is available 24/7 to provide additional information about the service.

The Default delivery time for this service is 1 Day, and 1 – 3 days for the Flawless option. Once the booster logs on to your account, completion takes 2-6 Hours.

Depending on the selected options, the ETA may be extended.

Flawless Raid – we will complete the raid without deaths, the ETA for the Flawless run is 1-3 Days;

Bitterpearl (Legendary Shader) – we will additionally find all 12 collectible items inside the raid to receive the Pearl Of Glass Triumph and the Betterpearl Shader.

Share a Glass (Sherpa Emblem) – we will take take 10 Guardians to complete their first Vault of Glass raid and get you the Share a Glass Emblem (collect it from Bungie Rewards when the service is completed).

Express and Priority – we will focus on your order in priority, and ETA for the service performance will be reduced by 30%.

Please note that some of the Extra Options can be provided only in Piloted mode.

We can’t guarantee any specific items drop. All in-game items obtained during the boost are random.

Boost guarantee time starts the moment booster logs in to your account and works only for services provided in the Piloted mode.

Guaranteed time does not count for the period of possible game maintenance or lags.

Small delays may occur as during certain hours boosters might be having a rest or be less active. In this case, Cross Save can help significantly, as a PC player will be able to fulfill your PS4 or Xbox order. Unfortunately, there are fewer Destiny 2 players on PS4 or Xbox compared to the PC platform.

It takes only a couple of minutes to enable the Cross Save. If you have some difficulties with it, please contact our Customer Support team for assistance.

Required Power Level – 1350, which is a base gear level, meaning you won’t have to gear up to prepare for this raid.

To provide the Piloted mode service we need only your login and password. We don’t need the answer to your secret question nor the password to your email address, which makes it impossible to steal your account.

Depending on the Platform of your choice, you are required to provide us with the Steam Guard/Playstation/Xbox authenticator code to process the service.

The Vault of Glass is an ancient mysterious Vex structure and a whole dimension of its own where the Past, the Present, and the Future meet and exist at the same time. Many aspects of this reality and metaphysical characteristics remain to be unknown – after all, time travel is very complicated.

While the raid environment was preserved pretty much unchanged, there are a few very important gameplay changes in the Destiny 2 version of the Vault of Glass raid.

There are also various changes to the encounters that we will mention in the next section.

Destiny 2 Vault of Glass Raid features five boss encounters and four secret chests rewarding some of the best weapons in the game.

First thing in the raid, you must open the door leading to the Vault of Glass. Split the fireteam to defend three vex plates against the Vex waves. Clear the enemies until the door opens. Follow the caves and make your way to the platform where the next 3 encounters take place.

Now that you’ve passed the Templar encounter, make your way to the Gatekeeper through the Gorgon’s Labyrinth – your fireteam must be stealthy and avoid detection by Gorgons patrolling the area. These terrifying creatures do not care about your Power Level and if they spot anyone, they will kill an entire group in a few seconds. However, there is a special Triumph «Too Fast, Two Gorgons» that requires you to defeat 2 or more Gorgons within 3 seconds of each other – if you need that one, everyone in your fireteam should come prepared with the Wardcliff Coil. 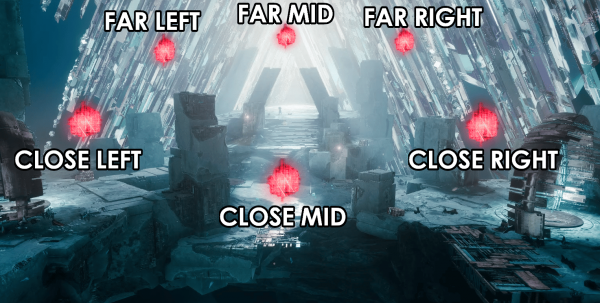 Once the Atheon is defeated, the journey is complete – you will get the Infinite Reflections emblem, boss loot, and lots of emotions from one of the best Destiny 2 raids.

Gather all the raid weapons and armor pieces from various encounters – use the table to navigate through the Vault of Glass raid loot and get the missing pieces for your armory.

Destiny 2 version of the Vault of Glass raid is the first raid available in Master difficulty – you may try to complete it when the raid is active on a Weekly Rotation. The current Power Level for the Master version is 1590, and the light level requirement is increased each season.

All legendary weapons from the raid have an Adept version called the Timelost Weapon – to acquire one you must complete specific raid challenges in Master mode.