If you are still looking for a fantastic party that’ll help you achieve a high Mythic+ rating in Dragonflight Season 1, look no further. You’ve found the ideal site to buy M+ Rating points, earn all the related rewards, and boost your character power to the end-game level.
Our World of Warcraft Mythic Rating Boost is done by professional teams from top guilds that beat Mythic difficulty dungeons for a living. Save time and treat yourself to a high RIO score with our Mythic carry service!

The service will be done by inviting your character into our team and farming Dragonflight season 1 dungeons on Mythic difficulty at a high key level. The service ends when you get enough rating points to reach the desired rating. As a result, of our Mythic Score boost, you’ll get the following rewards:

You can choose either Self-Play or Piloted mode for this boost. Former means that you will play yourself alongside the best team at our disposal. Latter means that one of our team will play for you. Please, be ready to share the login and password for your WoW account with us if you opt for Piloted.

Mythic Plus Rating Carry may take one to four weeks, depending on the rating you’re aiming for.

Level 70 character. Use our Dragonflight leveling boost service if you don’t meet this requirement.

Item level 390 and 50k+ average DPS if you want your run completed within the timer if your goal is done on higher keys (15+).

We will need access to your World of Warcraft account for some meaningful amount of time to work on your order. It will be occupied while we work.

Please disconnect the Battle.net Authenticator or disable the "always require authenticator for login" setting in Security Settings. Your account will be protected by the secret question for the duration of your boost. Don't forget to re-enable it once we finish the service.

Mythic Plus Rating: Rewards and Achievements

As usual with Mythic dungeons, you’ll get mounts, titles, and all the typical good stuff awarded for completing them. Not to mention more tangible things, like the Valor Points, gear rewards that you’ll inevitably loot from boss chests during your runs, and the Great Vault weekly rewards.

Progressing through the Mythic Dungeons Rating System is the only way to get various keystone achievements. At specific rating breakpoints, you’ll get:

As you can see, these achievements belong to the Feats of Strength category, meaning they are account-wide. More importantly, the rewards for each of them will be well worth the trouble.

What Is Mythic Dungeons Rating System?

Mythic+ Score, or RIO score, as it was known before being officially adopted by the World of Warcraft dev team, is the measurement of your success in Dragonflight Mythic dungeons. The RIO score system is a simple yet effective concept that allows players to compare themselves to other players. It serves well if you want to look for a team that closely matches your power and target keystone levels.

The Mythic Score system also functions as a leaderboard of sorts. A high Keystone rating allows you to boast about your achievements as a Mythic difficulty runner to all your close friends and relatives if you’re into such things. Trust us; your family will LOVE hearing your fond memories about that one time when you and four other random dudes beat that +20 keystone level the other day. Missing the timer, but it was THIS close!

Some would even argue that hearing these stories is as exciting as listening to your uncle, who once ALMOST caught a fish the size of a truck, but sadly, it got away.

(obligatory clarification: by buying our Mythic dungeon boosting services, you are guaranteed to beat dungeons within the time limit because we’re that good. Also, the intention of this joke was not to demean Mythic Plus enthusiasts or fishing aficionados but rather to point out that competitive Esports, while enjoyable to watch, is undoubtedly a niche subject. Attempting to discuss it in family gatherings, dates, random encounters, and job interviews doesn’t make for a good conversation starter nor constitute small talk. Epiccarry would advise against it if you intend to increase your social status or…).

Anyway! To the next question!

How Does the Rating System Work?

This system forces players to compete with each other, which is always a good thing in every multiplayer game; especially in WoW Dragonflight — an expansion known for many things, but one that lacks meaningful ways to motivate the players to improve their gameplay.

What is a Good WoW Mythic Plus Score?

It would help if you had a rating of around 2000 or above to join the group of capable players. This rating indicates that you have finished dungeons during the seasonal affix and the hardest affix in Dragonflight Season 1: Tyrannical weeks and Fortified weeks, respectively.

The key level, the number of affixes, and how quickly the team cleared the dungeon all impact how much rating is given. Therefore, to get your rating to 2.5k, you will need to consistently beat the timer every week until you get enough rating points. This undertaking requires solid gear, the best parties (preferably players that have prior experience completing higher keys and respective achievements to prove it), some dedication, and a ton of spare time. But the most crucial ingredient is definitely, a party of players who know what they’re doing. This is exactly what we offer in this very product, by the way! Wink-wink.

What is a Mythic+ Boost?

It’s a broad term that refers to WoW boost services in Mythic+ difficulty dungeons. The point of RIO Score boost is to spam Mythic dungeons on higher keys until your Mythic dungeon score gets to a specific value.

We offer to boost your character to three thresholds: 1500 rating, 2000 rating, and 2500 rating. Each rating has its own set of benefits, and higher ratings include all the rewards of lower ratings AND stuff you usually get in Mythic+ dungeons: Valor points, gear, Great Vault credit, et cetera.

How Does Mythic+ Score Boost Work?

Is It Okay to Go AFK during my WoW Boosting Service?

No, it is absolutely not okay to slack during high-level runs. If you can’t do your best and show peak performance during the entirety of the run, please consider account share.

Does Mythic Plus Rating Drop?

You can lose Mythic Rating points if you miss the keystone timer. The amount of Mythic Score you’ll lose depends on your degree of failure. For instance, if you complete the Mythic dungeon 40% slower than the keystone timer, you could lose up to 15 points. 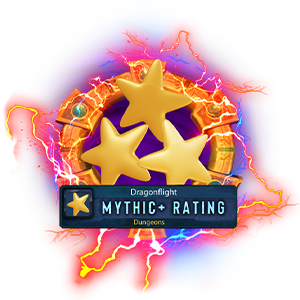